Our first day was such a blur! We left our house around 3:30am to drive to the airport because we had an early flight. We flew from here in Arizona to New York City, and had only a 2 hour layover until boarding the flight to Paris. The flights were both pretty good-the second one had more turbulence than I like, but I am a nervous flier, so really I think it wasn't too bad. My son slept through all of the bumping, so he wasn't worrying!!! My husband and I didn't sleep much on either flight, so we were pretty tired when we arrived in Paris...but that didn't matter because it was really early in the morning there...before 7:00am....so we had a whole day ahead of us!

The first thing we did was make our way to the apartment we rented off Airbnb for the week. We stopped along the way at a little bakery and had a croissant and some water. My husband ended up speaking Arabic with the shopkeeper rather than French. His Arabic is better and so after the guy figured out he spoke in that language, he didn't speak in French with my husband anymore. Hahha. After that we met with the lady to get the keys to the apartment and put our luggage inside. We had to take a little train and then a subway to the apartment, both of which were firsts for my son and I. They don't have subways in Arizona! Too much rock to blast through, I guess. The apartment was super cute. The lady showed us around and we freshened up by washing our hands and using the restrooms and then....off we went!

We went to a museum called the D'orsay Museum. We wandered around in there for quite awhile. My son was excited to get pictures of some of the famous Van Gogh paintings. I enjoyed some of those as well. There were also some neat sculptures in there. We took lots of pictures. I was so tired that there are so many parts of that museum that I have already forgotten, which is a shame.

After having lunch at a place where we tried snails for the first time (they were good-very salty), we went to a second museum called the Cluny museum. That was more interesting to me. It had lots of religious art, and stained glass art. I love stained glass. I think my favorite work in there was a very old wooden donkey carrying Jesus that had been carved. It was just so detailed and beautiful...I am happy that I have a picture of it, although it was encased in glass, so there may be some glare. 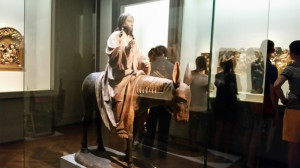 After that we found some dinner-I have no recollection what it was- and then went back to the apartment. We were all so tired, but I am a wimp so I get tired quicker than the guys....I actually got tears in my eyes as we walked up the streets because my husband was walking so fast...he is about a foot taller than I am, so his steps are much longer and I get left behind! Looking back on it, I feel quite stupid for crying over that....but exhaustion does crazy things!!! After that happened, he slowed down!!! When we got back to the apartment we all fell asleep before 8:00pm. I know that I fell asleep before 7:00pm, and slept on the little couch until some time in the middle of the night when I moved to the bedroom. The night was warm so we kept the doors and windows open. We felt safe doing that because the apartment was on the 4th and 5th levels, so no one was getting in unless they scaled the wall!!!