Today I feel grumpy. I know that part of that is because I did not sleep well. Also people who are self centered are really dragging me down. Other people just make me feel sad... and so here is my rant. :)

My mom hates her job. I know I've mentioned that before. She is miserable. But she does not want to look for another job. I don't know why. She has recently been talking about taking early retirement. She doesn't have any actual retirement accounts so this would be Social Security alone. She says the worst of it would be that she would be without health insurance for 2 years, but that it should be ok because right now she is in really good health. Uh....she takes high blood pressure medication, high cholesterol medication, sleeps with a CPap in order to breathe at night, and has been diagnosed with prediabetes, which she does not monitor at all. Yep-picture of health. How could this not end well? I mean, I understand being miserable at your job, but.... yikes.

My sister hates her job. She hates every job she ever gets after she has been at it for a few months. I don't often talk to her about it because it makes me a little crazy to listen to the complaints. Today she has been texting me all morning wanting to know if i think it would be bad for her to quit her bank job (with all kinds of loaded benefits) to work at Walmart. She says that she thinks if she keeps her current job that she will die of a blood clot because she sits down all day at her desk. Then she said that her family expects her to get everything done at home while working at home, and they don't understand... ....

The ladies at my office are acting like spoiled brats. I can't really go into details about that, but it has to do with administering covid vaccines. They are being so disrespectful to our bosses...I cannot even imagine behaving like that.

And listen to me complain. Like that will help. Hahahahah.

Last night I had a terrible dream that Abby fell down the stairs. I was close enough to see but far enough away from her that I couldn't stop it. She topped head over heels, but in the dream she landed straight on her head. She didn't lose consciousness but rather took on a frozen sort of stunned expression and stiffness. It was terrible, even though it was just a dream. Then I got to her and picked her up and she was immediately telling me she was just scared but was ok, and when she opened her mouth to cry a little, I could see that her front two teeth had been chipped off right at her gum line. Ugh. Terrible.

This morning my son went to some yard sales. He bought a portable record player. He has a record player that is larger but it can't really be moved around because of the size. This one is cool because it is in a little case and can be taken back and forth to his dad's or up to his room, or whatever. Pretty cool and the price was right. I bought two little metal wire things that were shaped into a frog and a turtle, and then had stones laid in. They are very cute for the backyard. I will try to remember to take a picture of them sometime-I'm not describing them well.

After that was home and laundry. For dinner I made some healthy type of pasta. I also made peanut butter cookies. The cookies were a special treat. Starting on Monday, I've had us on a different kind of diet. Well, the thing is, my husband is having bad heartburn again. He has problems with that if he gains too much weight, and maybe it is made worse because his hernia repair is being pressed on. Anyway, he has been having lots of problems, so I decided enough was enough with all his crap eating. So-he is not getting any more fried things from me. Not that I ever cook fried things, but he would ask me fairly regularly to get some fried thing for him from the store deli, or if we went to a fast food, etc. I just feel like it has been getting out of hand. I think maybe some of that is because he has been having some medication adjustments lately, and that makes him want to eat more, either from stress or just his appetite is different or something. I don't know, but if all you want to do is complain and not change your diet on your own, then I will help since I am the one who makes all the food anyway. So instead of asking his opinion on what he might like, I've just been cooking things I want him eat. And for me...I have gained about 10 pounds that I am looking to off-load. My problem is with dessert...I love baked things. So, cutting that out as well. It's been going fine. The heartburn is sloooooowly easing off. More lean protein, lots of fruits and vegetables. The way I prefer to eat anyway, just getting back on track with it. Laying off the cheesy, gooey casseroles. :)

I'm reading a fun little book by a guy who spent time volunteering at an animal rehab place in Ecuador called Santa Martha's. It's really fun and I'm enjoying it.

You can get card with your statistics here!

How did I, someone who is not super girly, end up with such a girly girl?  It's adorable.   Before a walk, she needs to get at least one hat, a purse, and usually sunglasses.  She's really very glamorous.

I'm feeling a bit whiny and sad today. I don't really have a good reason for it.. I just do.

The mommies up the street organized an Easter scavenger hunt type of thing. The ringleader of mommy group sent an email around asking if people wanted to participate that they hang something in their tree or on a bush or something, and then she created a master list for it all. Whoever wants to let their kids participate can print off the list and look for the stuff as they go for a walk down the street. The completed checklist can be returned to the mommy and she will, in return, put an Easter treat of some sort on their doorstep. I suppose that except for the part where she will hand deliver their prize, she did really look out for the social distancing guidelines. She was clear that kids shouldn't be hunting around for food or actually going in yards...the stuff on the list is supposed to be hung on a plant or in a window, etc. Generally I stay as far away from that group as possible, but this didn't seem like her worst idea, so I hung a few eggs out in my tree earlier today. I realized when I went out tonight that they were basically invisible because of a branch that dangles down, so I ended up going out tonight and relocating them to the small palm tree thing that is closer to the road. Neither of my kids will participate (Garrett is at his dad's house, and Abby is too young) but as people take their evening walks with their kids, I hope they will have fun. I don't think this type of thing would work well in all neighborhoods, but our neighbors do this kind of thing sometimes and everyone is actually really respectful of each other's stuff when they do it, so it should be ok.

Time for a bath for a little girl over here.

In my spare time lately, I have been cleaning and organizing things around the house.  Little by little.  Sorting through things and setting some aside for future donations or for a yard sale when that's possible. It is nice to do those things and since work is slower I have been able to do a bit more than usual.

Among the things I found were some skin care samples and makeup type of samples that I had put in a corner of the bathroom when I was pregnant and never gotten back to.  Anyway, I tried a face mask tonight.  It was this thin sort of cloth type thing that came in a foil packet. It said it was something to do with pearl....I forget what word they used on the package, but it made me think of someone smashing the juice out of a pearl and then wondering if that is even actually possible.

It was fine. It was cool on my face and felt like I had put a cold, non greasy lotion ono. I didn't leave it on for the full 20 minutes suggested because I went to take laundry out of the dryer and it started slithering down my face. Probably it's meant to be worn when one is relaxing in a bathtub or lounging around,  but since I don't do either of those things.....haha.

Now, surely when I wake up I'll have glowing skin and look at least a few years younger. Right?

I may have more later,  but I can't wait to post this happy lobster... 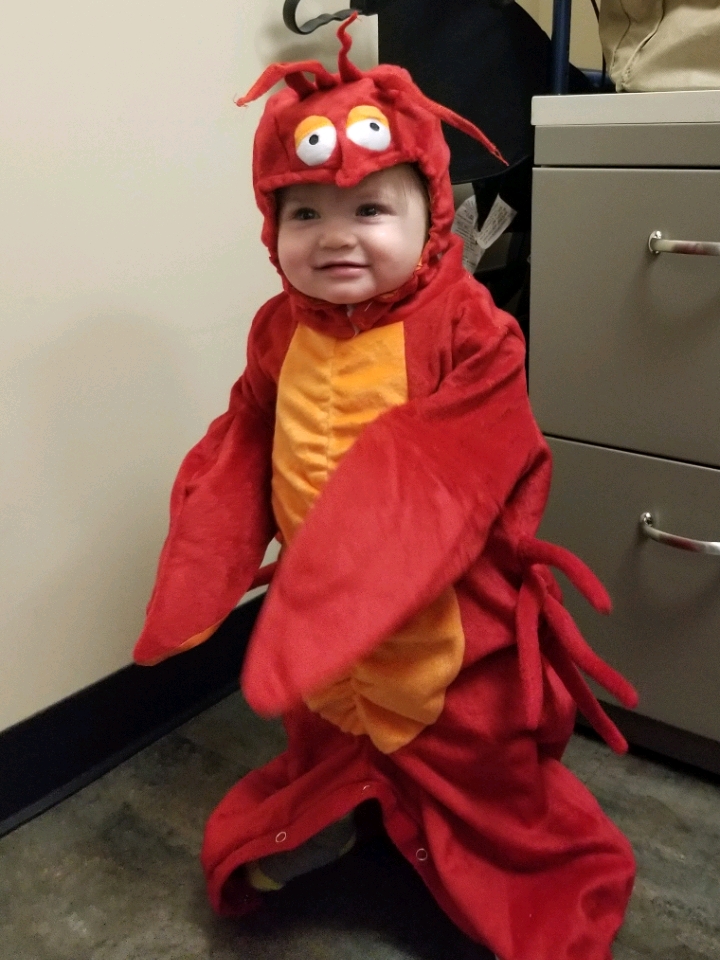 Well,  it was another insane day.

This is my son and daughter.  First time I have caught her smiling on camera.  I was so worried that he would not like her or would be resentful of her, but he isn't.  He loves her so much, and he is her favorite.  She will sit with him without fussing for longer than for my husband or I.  It melts my heart ♡♡♡♡♡ 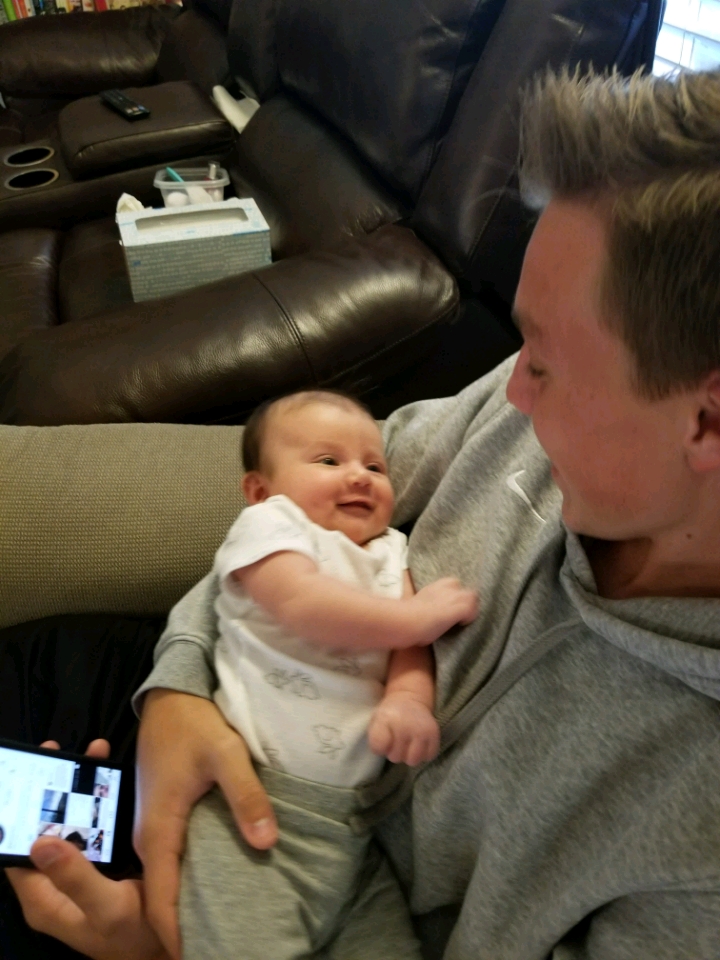 Today i felt more like a human being, although i knlw every day may not go as well.  The baby was up every 2 hours last night but i went ahead and forced myself to get up and get moving and not just sit around in my pajamas until noon.  I showered while she napped in her seat, then logged on and did my reports. Stopped once in between for a feeding and then finished that.  Later in the day she had another good nap and i relaxed a bit with my book.  It seemed like she was more relaxed today than she has been. Maybe she has just been reading my anxiety with all the company but now we can both relax a bit?

This evening i ran to the office and dropped my stuff off.  Now my husband has gone to the store for a few items for the week.  He can't find where they keep the grapes. Hahahaha.  I have totally spoiled these guys around here.  But that's ok...i love them and i want to.

Tonight we will chill out and maybe play a game or watch TV. Nothing major.